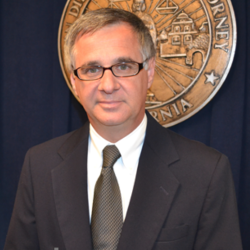 After graduating in the top 5% of his law school class at De Paul University in Chicago, Dominic moved to California. He worked 2 years to as an attorney for Justice Charles Hamlin of the California Court of Appeal. Thereafter, he joined the District Attorney’s Office.

Dominic established San Diego’s Workers’ Compensation Premium Fraud (1996) and Medical and Legal Insurance Fraud (2005) Task Forces. Both of these were the first of their kind. He also authored several articles on insurance fraud including premium fraud.

Dominic’s success resulted in several awards. In 2016, he received the “Edwin L. Miller Lifetime Achievement Award” from the San Diego District Attorney’s Association. In 2010, Llorente Investigations named him their Nationwide Insurance Fraud Prosecutor of the Year. Previously, in 1999, he was named Insurance Fraud Prosecutor of the Year by the International Association of Special Investigation Units for Southern California. Dominic also was awarded a Certificate of Recognition from the FBI and a Commanding Officer’s Citation from the San Diego Police Department.

Dominic has taught numerous classes throughout the country on how to investigate and prosecute insurance fraud including premium fraud. He also spearheaded and designed in San Diego one of the most successful anti-insurance fraud outreach programs in the country. This high-profile public campaign to deter insurance fraud included Public Service Announcements on Television, Billboards on Freeways, Anti-Fraud Posters for employers, and Ads in dozens of publications in numerous languages.

Prior to retiring from the DA’s Office in September 2019, Dominic served as Co-Chair of the Coalition Against Insurance Fraud out of Washington, D.C. for 3 years.