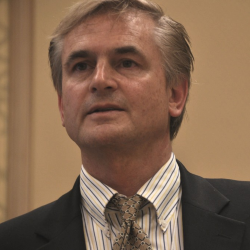 Mr. von Geldern’s responsibilities now include heading the realignment and justice restoration policy and practice unit of the Alameda County District Attorney’s Office. He continues to be the CDAA Technical Advisor for this Annual Conference. In 2002 Mr. von Geldern pioneered the extremely successful CDAA Multi-Agency Fraud Conference, which was held annually in Northern and Southern California, and which merged with the annual NCFIA Training Conference in Monterey to create this Annual Anti-Fraud Conference.

For the Insurance Fraud Advisory Board (IFAB), he serves as the representative prosecutor. He was invited to participate in the California Peace Officers Association’s Standards and Ethics Committee. He successfully initiated and wrote legislation that reformed California statute of limitations law. He is active in bipartisan efforts to improve the criminal justice system, including legislation and Court driven initiatives. He frequently lectures on ethics, discovery, and fraud-related issues. His jury trial experience ranges from prosecuting property crime to special circumstance murder. He received his undergraduate degree from UC Berkeley and his law degree from the University of Michigan.